Chinese Certificate No. 1950609 issued for Semiconductor Laser Assembly and Packing 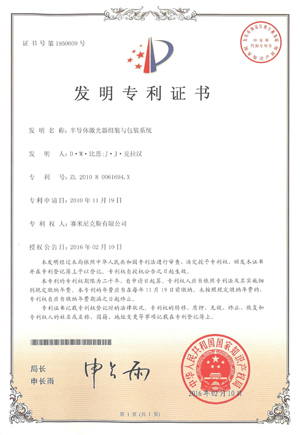 SemiNex Corporation is pleased to announce that it has received a Certificate of Patent for Invention from the State Intellectual Property Office of the People’s Republic of China. The awarded patent parallels U.S. Patent 8,811,439 B2 for Semiconductor Laser Assembly and Packaging System. The U.S. patent was awarded August 2014. This new patent continues to strengthen SemiNex’s Intellectual Property portfolio and reinforces the company’s position as a worldwide leader for high power InP lasers between 1300 and 1700nm.

“SemiNex recognizes China as a growing and important market. We look forward to working with our partners and customers to bring a best-in-class integrated Laser Engine to the Chinese market,” SemiNex President David Bean stated. “This newly issued patent provides a path for us to do this with confidence.”

Sales and Marketing Vice President Neal Stoker added, “SemiNex is on the forefront of new and developing technology. Securing this patent along with our other patents gives our customers the confidence that they are working with leaders in the industry.”