A laser diode is an electrically pumped semiconductor.  When semiconductor layers meet, charge carriers combine and the electrical current in the laser’s energy is released as photons.

A 1450nm laser diode has a wavelength in the infrared region of the spectrum. This wavelength is also know as 1.45 µm, or 1.45 micrometers. Laser diodes with a wavelength of 1450 nanometers are used in a variety of industries and applications. The wavelength is in the “retina safe” range since the ocular fluid is highly absorptive in this region. Please note that all lasers have the ability to cause harm, and care should be taken in their use and application.

Laser diodes with a wavelength of 1450 nanometers are used in a variety of industries. Applications for 1450nm diode lasers include:

C-Mount: Right side, Top, Left side

A diode laser with a wavelength of 1450nm is an infrared diode laser, or a laser whose light is invisible to the naked human eye. When a 1450nm laser diode is used in free-space optical communications, the laser light’s invisibility prevents interference from other sources.  Lasers also have a low divergence meaning that the light does not “spread” as it propagates from the transmitter to the receiver.  The most common free space communication application is IR remote controllers for many house hold appliances.  These however are short distance applications and utilize LED’s instead of lasers.

1450NM DIODE LASERS FOR THE MILITARY

The invisible wavelength also makes 1450nm laser diodes popular with the military for range finding. In the military, 1450nm diode lasers are primarily used as laser target designators, which are used with precision-guided munitions to guide the munitions. An infrared diode laser of 1450nm is favored when directing munitions at live targets because light from a laser diode at 1450nm will not be seen by the target.

1450nm diode lasers are commonly used by the cosmetic industry for non ablative facial treatments, which are an alternative to ablative full-face laser resurfacing treatments.

Ablative treatments, while effective in the treatment of rough facial skin, facial wrinkles, and dyspigmentation, remove the epidermis (outer skin) and part of the dermis.  Ablative treatments need at least one week of recovery between treatments.  During this recovery patients often experience crusting and swelling of the skin and significant discomfort as the skin heals. 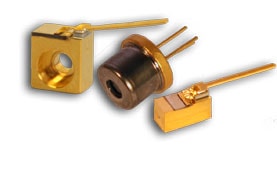 Using 1450nm diode lasers in non ablative treatments reduces this downtime and discomfort.  1450 nm laser diodes are also safer to use on patients of color because infrared lasers are less likely to cause pigmentary reactions. The 1450nm laser diode is eye safe.

Visit the 1450 nm Product Finder for more information on SemiNex’s product offerings in this wavelength, and detailed information about each product.